I built the simple signal generator described in Electronic Design. The same circuit you find on ZL1NC and epanorama. Together with an Oscilloscope it can be used to find a cable fault as described in this All about Circuits article.
The 74AC14 SMD is mounted on the board its trace side. All other parts are through-hole. Most parts were salvaged from old electronics. You can adapt the PCB to your needs.

The board is powered with three alkaline AA cells. A Digital Oscilloscope, OpenHantek, and a battery powered laptop were used in the, ahem, ad-hoc test setup. From the five (10ns, 50ns, 200ns, 1µs, 5µs) options only the 10ns and 200ns were used. The 40MHz bandwith of the 2090 DSO was, as expected, insufficient for checking a two meter long cable. After all, this was an experiment out of curiosity.

On YouTube you can find this instruction video by W2AEW. He gives a clear explanation. And has a better scope too :-)

Set the oscilloscope probe to 10x as the 1x option limits the bandwith. See the Electrical Engineering post for example.

Download the Eagle board and schematic files (50kB zip). 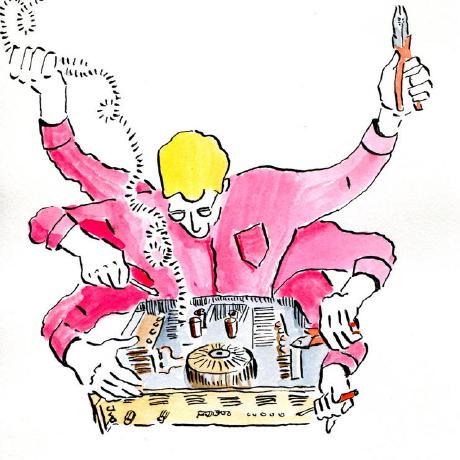